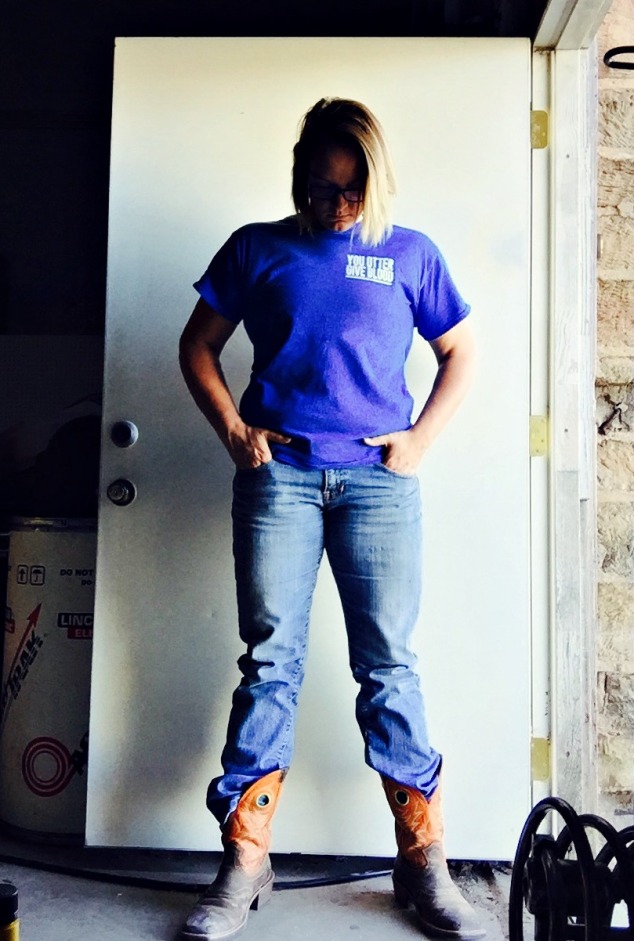 Just a girl who is kind and has a heart too big for this cruel world.

I’m just a girl who is 100% authentic in herself…and that’s no longer good enough.

I’m almost 6 foot tall; all legs and a short crooked torso. I wear a t-shirt, jeans and boots almost every day and my “dressed up” is probably less fancy than society’s version of “dressed down” for a 20-something woman these days. I lost my boobs to fitness and I don’t even own a dress. I do love to fix my hair and play in makeup from time to time – but this still just isn’t good enough for this feminist driven society.

I get dirty…a lot, because my job requires it. I’m not afraid to work, never have been. I was shoveling shit on a ranch before I could drive, earning my keep that led me to be the horseman I am today. I love to go out in the field and come home at the end of the day filthy and exhausted because I busted my ass.

I also love to come home at the end of that day and throw some laundry in, whip up dinner and make sure the house is in order. There’s just something about the smile on a mans face when dinner is almost ready when he gets home.

I’m not a feminist.

I’ve watched this dynamic since I opened my eyes and I respect my grandparents and their marriage of 66 years more than any of these short lived so called relationships of this century.

I am an extremely independent woman and there aren’t many things I can’t do on my own, but I can tell you from experience…I absolutely REFUSE to live in a household without a dynamic like my grandparents have, ever again. I don’t WANT to be equal to the man in  my life – that’s not the structure I desire. I want a man who can be a man, someone who desires to take care of me and protect me; not someone constantly hiding behind me and asking ME for direction? If I wanted that I would have been a switch hitter.

I am so confused by feminism, I guess specifically because I’ve never not “felt equal” to men? Maybe that’s because I was raised in the industries of a man and learned quick that in order to keep my place I needed to earn it? Who freaking knows.

All I know is this – women have created this skewed vision of the “modern woman” that is FUCKING THINGS UP!

We are all supposed to be put together, with perfect bodies and skin, stay up with the latest fashion, have high paying jobs, pay someone else to raise our kids, get educations, and bitch about the things men are doing wrong. We are supposed to rebel against EVERYfuckingTHING that is “typical” for a woman, too.

COOK? HA! You can cook your own dinner! Just because I’m a woman doesn’t mean I have to cook for you!

Don’t open my door, I can do it myself!

GIRL POWER! No one can tell us what to do with our bodies, let’s parade around half naked!

Have I already asked you to shoot me? If not…SHOOT ME ALREADY!

Do you know how embarrassing it is to be a woman in her 20’s these days?

Women have made feminism into something extreme that is going to greatly impact the younger generations – in a very negative way. They are single-handedly killing chivalry one “I’ll get my own door” at a time. They have completely taken the modesty and mystery out of, well, EVERYTHING – and they are getting MAD about the reactions it’s causing. Not to mention that whole equal pay business.

We are constantly downgrading men for being “dogs” and “players” …but won’t step back and see what’s made them this way.

We idolize people like Beyonce’ and Miley Cyrus but bent out of fucking shape when Trump says he wants to grab someone by the pussy?

Do I think it’s okay for a man to throw degrading words at a woman? HELL to the NO, and I’ll be the first one to say something if I see it happen..BUT…

You get what you put out into the world. Respect yourself and you will be respected.

Keep your kitten in her pants and well, maybe no one will try and pet the damn thing.

I’m fucking old school. I don’t fit the mold of any “stereotypical female” and I never will conform to one.I will always happily go into “wife mode” when chores need done and I’ll always happily roll up my sleeves when someone needs an extra hand. Instead of crying to my mommy if some asshole runs his mouth, I’m going to just bitch slap him and tell him what I think!( I’d also suggest you keep your “oh, but what if he overpowers you” thoughts to yourself unless you REALLY want to open that can of worms.) If I get another job, where I make less than the men at the company,(*note, this is the current situation for my job) I probably won’t ever say anything…because there is LIKELY a reason! AND…get this, if there isn’t…I’ll just leave.

I’ll also continue to uplift every woman I see, because these standards…these things that have made me be scared to be myself for so many years, they’re scary. They’re ruining the younger generation and killing a part of what made love and marriage so beautiful to begin with.

I bet this stirs the shit pots of a LOT of folks out there.